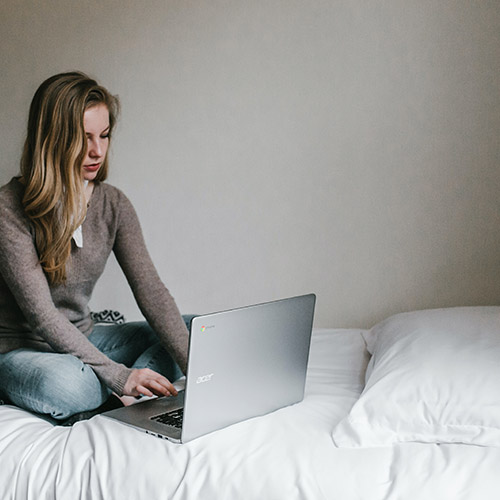 Working from the discomfort of your own home

Home > Working from the discomfort of your own home

The working from home honeymoon period is over

With so many organisations packing up their offices and accepting a more remote long-term future, Zoom meetings from kitchen tables look here to stay. But as we move into the autumn the short term crisis mode in which remote working became the norm is likely to come under increasing scrutiny.

Employers have a duty of care to check back in with their staff and make sure they’ve got everything they need to do their job effectively. The question is: how many will take the necessary steps?

The Health and Safety Executive remind employers that the same safety measures they have in place for their workers in the office still apply at home. They even have an extra section dedicated to ‘lone workers’ on their website [1].

At the beginning of the pandemic, HR departments everywhere made worker’s physical and emotional wellbeing a top priority. Companies handed out allowances for equipment, gave parents extra flexibility to arrange childcare, and organised quiz after quiz to keep everyone connected.

The Local Government Association stresses [2] that ‘Employers should be taking steps now to make sure their workforce has the necessary tools to work at home effectively’. It’s time for businesses to recalibrate what the next stage in employee safety looks like now the initial adjustment phase has reached its end.

Working from home isn’t for everyone

The obvious first stop for risk managers is to make sure workers aren’t causing themselves unnecessary physical harm. Some people don’t have the space or disposable income to create a suitable working environment and instead have spent the past 6 months making do with the environment and furniture they already have.

In a recent article employment lawyer Caroline Doran Millet at Royds Withy King[3] predicts a steep rise in claims resulting from workers persevering with poor equipment. ‘Employers should carry out risk assessments – if not, they could be found at fault in a future claim for something like repetitive strain injury. The chance of problems arising grow with the amount of time workers are at home.’

It’s the UK’s younger generation of workers who have felt the pinch of remote working the most. Living in houses with several other housemates makes finding a suitable space to work near impossible. Their rooms are too small to fit a desk, and even if they can find space, being confined to the same room for the majority of the day can be oppressive and counterproductive. Some wrestle for a place around the kitchen table, others have to make do perched on the staircase.

It’s lonely out there

They’re also the portion of the population who have felt the most isolated. A recent survey[4] found that says 74% of participants aged 18 to 38 ‘have reported high instances of lockdown loneliness.’

So many of our workers would never have even considered the ‘freelance lifestyle’ before the pandemic arrived. The occasional day in the week working from home was always a nice novelty. But a big benefit for people opting to join an organisation is often the social structure it provides.

No number of virtual quiz nights can replace those lifelong friendships cultivated by the watercooler and workers are really starting to suffer from a lack of physical interaction with their colleagues. Severing those ties completely could cause people to look for work elsewhere.

Blending work life with life at home has also been a troublesome feature of remote working. When so many of our workers are now only commuting from one side of their apartment to the other, it’s harder to mark off where one world ends and another begins. Coming away from a place of work helps people decompress, draw a line under the working day and grab some much-needed respite. But with the lines blurred, it leaves very little space for people to switch off and can have a detrimental effect on their mental health.

And within the working day, for some, the way video calls are scheduled is leaving workers very little time to catch their breath. In the office, there’s time to make a coffee. Or even just a natural break moving between conference rooms. Now often as soon as one call ends, another begins.

There’s now ample evidence starting to emerge to suggest there’s substance behind the widely used term ‘zoom fatigue’. Andrew Franklin, an assistant professor of cyberpsychology at Virginia’s Norfolk State University has his say in National Geographic.[5] He says we’re all suffering from ‘continuous partial attention’, which means our brains are going into overdrive trying to read multi-person screens. ‘We’re engaged in numerous activities, but never fully devoting ourselves to focus on anything in particular.’

There’s also the added stress of looking back at your own face and being hyper-aware of having to perform. Professor Marissa Shuffler, a workplace well-being expert at Clemson University,[6] says ‘When you’re on a video conference, you know everybody’s looking at you; you are on stage, so there comes the social pressure and feeling like you need to perform. Being performative is nerve-wracking and more stressful.’

We’re also much less collaborative as we’re all sharing one audio stream. People can’t break away and have their own parallel conversations, so we’re often just listening in to two or three lead speakers.

The potential savings of adopting a more remote business model might be too attractive for organisations to resist in the current climate and the current financial challenges that the public sector faces could make those even more precient. But the fact that so many of their workers aren’t set up to thrive under all working from home circumstances cannot be ignored. Before rushing into any long-term plans, employers are duty bound to have an open and honest conversation with staff and review each individual’s personal preference. If they don’t, the potential for claims is significant.