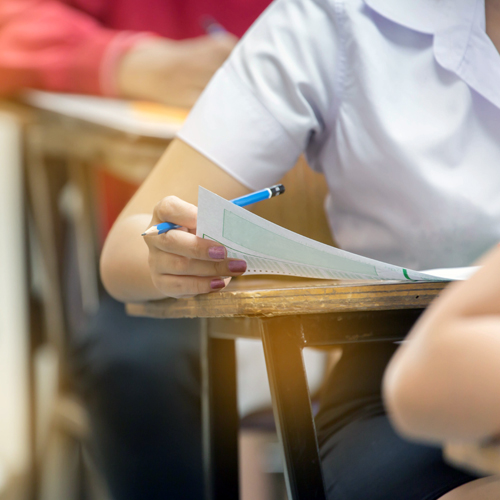 Educating the next generation safely

Home > Educating the next generation safely

The past 25 years have seen an upsurge in the number of children in the UK and significant investment in education. Over the last decade, the trend for ever upwards population growth has started to slow and the huge increase in numbers in primary schools is moving into the secondary sector, while spending on education has peaked. At the same time, the risk landscape has evolved, as large-scale tragedies have forced schools to evaluate how they operate safely. Looking forward schools will face the evolving challenge of keeping pupils safe in an increasingly individualized digital world.

Since 1994, there has been a significant increase in the number of children in the UK, up by one million[2] in total. This increase saw school rolls increase by 66,000 in 2018 to reach 8,735,098 children[3], however, the uplift in numbers has moved to secondary schools suggesting that the growth in the overall number of children may now be levelling off having previously been concentrated in primary schools. Local government has responded to sharply increased demand by creating 825,000[4] new school places since 2010.

This huge effort has seen more places, but the number of schools has remained static. Leading to larger schools on average. The uptick in pupil numbers with no real increase in the number of schools means there are more pupils in each school. In the mid 1990s the average secondary school had approximately 800 pupils, today that has risen to 948[5].

Despite the increase in pupils, the ratio of teacher or adults to children has seen relative falls since the second-half of the 1990s, falling to 21[6] from a peak of 24 in primary schools and declining from 17.9 children per teacher at the start of the millennium to stand at 16.4 in 2018 in secondary schools.

Today, more government money is being spent on a static number of schools, each of which has, on average, more pupils and more teaching staff. 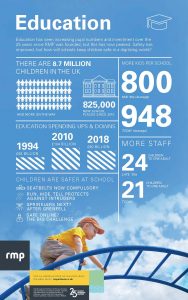 Alongside changes in the make-up of the UK’s schools, the level of risk to which all public organisations are subject, has altered dramatically. From concerns about fire hazards, motor risks and the threat from terrorist or other threats, these are combined with rising concern about pupils own mental health as social media, unheard of in 1994, has transformed the risk landscape to which teenagers are subject.

Most recently, the horrific tragedy at London’s Grenfell Tower fire on 14 June 2017, has caused widespread concern about fire safety across the public sector. The Association of British Insurers (ABI)[7] has actively engaged with national and local government, and other fire sector stakeholders, to make the case for meaningful reform to the whole system. The mandatory use of sprinklers currently not enforced in UK schools, is under consideration. In March of this year, the Department for Education launched a call for evidence about whether combustible cladding should be banned in all new school buildings more than 18 metres high and is also seeking views on using sprinklers and safe fire escape approaches for multi-storey school buildings.

While the threat of fire has always been a peril that schools need to consider, the potential for murder on school premises has sadly come dramatically into focus over the past quarter century. Following the horror of the massacre of 12 children and their teacher at Dunblane on 13 March 1996, The Cullen Enquiry made a series of recommendations, reinforced by new health and safety legislation in 1999. These required schools to appoint someone to prepare a safety strategy for the protection of the school population against violence, together with an action plan for implementing and monitoring the effectiveness of safety measures.

With the firearms legislation enacted the year after Dunblane, mercifully to date, there has been no repeat incident, however, in the intervening years the threat from terrorism has grown. The broader shift in terrorist tactics towards targeting people rather than property, has led to a widespread understanding that schools remain a potential target. To combat this threat The National Police Chiefs’ Council has published “Run, Hide, Tell” guidance[8] within lesson planning, tailored to children aged 11-16.

Greater focus on safety away from school

Government estimates that UK school children participate in 7 to 10 million days[9] of activity outside of school every year. In this area the impact of significant tragedies has had a meaningful impact on the development of effective risk management. At the end of 1993, a minibus crash on the M40 caused the death of 12 children and their teacher, who was driving. The inquest found that the minibus was not fitted with seatbelts, and in 1997 the law was changed to make seat-belts standard and did away with bench seating in minibuses.

While seat belt requirements were an important step, the M40 tragedy perhaps more importantly highlighted the need for better risk assessments before and during school trips. There is little doubt that this message has been taken on board and safety has improved to the point that the Health and Safety Executive now includes advice about the law and “tackling health and safety myths”. As rospa comments “Since 1996 (when these sorts of cases started to receive more official scrutiny) just two teachers have been convicted after failures relating to an accident on visits or outdoor activities.”[10]

Much of the welcome change over the last two decades has been in response to shocking levels of human death or injury. Just as the horrific Dunblane massacre resulted in much needed updates to handgun laws and school access. We can take heart that the lessons from the Grenfell Tower disaster are being learnt and improved fire safety will result.

As we enter the digital age, perhaps many of the risks to physical safety have reduced but we need to better understand the risks from cyber bullying and shaming, which can be just as dangerous. The 2018 suicide of Molly Russell has highlighted how social media can cause real harm to children, and schools will need to increasingly develop effective risk management processes to prevent awful individual family losses becoming numerous and more common.

Not all risks can be foreseen, however, learning the lessons is vital in keeping our children safe in an increasingly complex world.