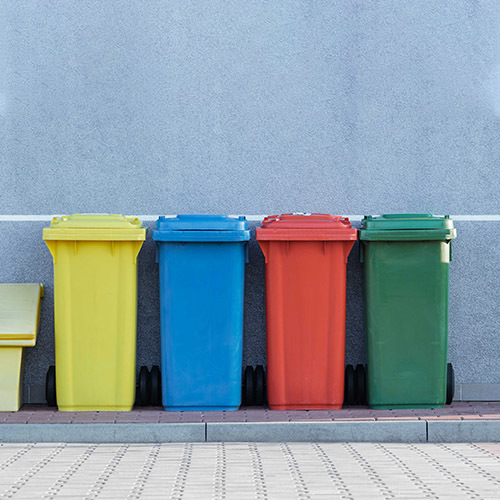 Attitudes towards waste and recycling have undergone a sea change during the past 25 years, with the issue moving from a concern among environmental groups into the consciousness of wider society.

As awareness builds as to what happens to the rubbish we throw away, and the consequences for the world and the ecosystems that help it thrive, individuals, local authorities and industry have stepped up efforts in the drive to recycle.

Against this backdrop, the UK has declared war on plastic pollution. While awareness of the damage plastic can do to the environment has also been gradually gaining momentum over the past 25 years, the pivotal moment in changing public views on the issue took place in December 2017.

That month saw the screening of David Attenborough’s Blue Planet II, with the sight of albatross parents feeding their chicks plastic among many signs of the damage plastic waste is doing to the marine ecosystem. This proved a wake-up call for many, catapulting the issue onto the mainstream media agenda.

A month later, the UK government announced a comprehensive plan to tackle the country’s plastic problem.

The UK Plastics Pact[1] was launched by the Waste and Resources Action Programme with a goal of meeting a series of key targets by 2025.

Backed by 40 major companies, the pact is targeting 100% of plastic packaging to be reusable, recyclable or compostable by 2025, with single-use packaging eliminated.

In May this year, the UK government[2] moved a step closer to reaching these goals by confirming a ban on plastic straws, drinks stirrers, and plastic stemmed cotton buds in England.

The ban is due to come into force in May 2020 and follows a consultation which saw more than 80% of respondents back a ban on the distribution and sale of plastic straws, 90% a ban on drinks stirrers, and 89% a ban on cotton buds.

Amid these signs of progress, a report issued last year by the World Wildlife Fund, in conjunction with Eunomia Research & Consulting[3], has projected a sharp rise in plastic waste being produced in the UK over the next decade.

The study found packaging accounted for 67% of the UK’s plastic waste, driven by the high intake of convenience foods in the UK.

At present, only 26% of plastic waste is recycled in the UK, with more than half (55%) sent to landfill. Widespread behavioural change is needed if the UK is to meet its targets for plastic waste reduction.

The war on plastic forms part of a recycling revolution which has seen a year-on-year rise in the amount of household waste recycled over the past decade.

The most recent dataset[4], published earlier this year, shows 45.7% of waste from households was recycled in 2017, continuing the steady increase which has seen the recycling rate rise from 40.4% in 2010.

Throughout this period Wales has outperformed England, Scotland and Northern Ireland, and has already surpassed the 2020 target. In 2017, 57.6% of household waste was recycled in Wales.

The UK has committed to European Union[5] targets for household waste reduction post-Brexit, [6]meaning 50% of household waste will need to be recycled by 2020, rising to 65% by 2035.

Legal provisions are in place in the UK for any fines imposed by the EU to be passed down to local authorities.

Recognising that a further push will be needed if the UK is to meet these targets, the Department for Environment, Food & Rural Affairs has introduced a Resources and Waste Strategy[7] which is aiming to increase the amount of waste recycled in the UK.

This strategy will see the introduction of a consistent set of recyclable materials collected from all households in England, including plans for weekly collections of food waste, as well as consistent labelling on packaging to drive up recycling rates.

To fund this, Defra plans to make companies pay higher fees if their products are harder to reuse, repair or recycle, in the hope this will encourage more sustainable design.

Cutting down on food waste is another challenge for the UK to tackle. An estimated 10 million As well as the damage caused through the disposal of this waste, a fifth of UK greenhouse emissions are associated with food and drink, mostly during production. The UK is working towards the UN Sustainable Development Goal of cutting food waste at consumer and retail levels in half by 2030.

Amid this drive, the waste management sector has grown into a major driving force in the UK economy – the Department for International Trade has estimated the sector now generates an annual turnover in excess of £9bn.

One of the challenges facing the sector is how it processes the mountains of rubbish that the country produces. In recent years, much of the UK’s plastic waste has been exported to China, which handled much of the world’s recycling needs.

However, China introduced a ban on importing foreign waste at the start of last year, driving a need to improve waste processing facilities in the UK.

Another potential fallout from this scenario is the development of further energy-from-waste facilities in the UK.

According to a report from Grant Thornton[8], there are 40 proposed energy-from-waste facilities in varying stages of pre-contract development throughout the country.

Driving greater efficiency at energy-from-waste plants is part of Defra’s Resources and Waste Strategy, alongside working with local authorities and business to improve urban recycling rates and working arrangements.

The waste sector brings its own bespoke insurance needs given the complex nature of the risks.  Local authorities may require contractors to provide performance bonds before awarding contracts, while companies operating in the waste sector will require cover for exposures ranging from property, plant and machinery to liability insurance.

Given that the waste sector may handle potentially hazardous materials, they also need to ensure they comply with Control of Substances Hazardous to Health regulations.

In addition to employers liability cover, firms operating in the waste sector may also need other protection such as environmental impairment liability insurance and cover for the firm’s directors and officers.

For some sectors, such as waste-to-energy, obtaining insurance at an affordable price is becoming increasingly challenging as the insurance industry seeks to put itself on a sounder financial footing.

But the greatest risk facing all stakeholders is that of inaction, and the future this could create. With momentum still building from the ‘Blue Planet Effect’, winning the war on plastic and meeting recycling targets will have a critical role to play in securing a more sustainable future.