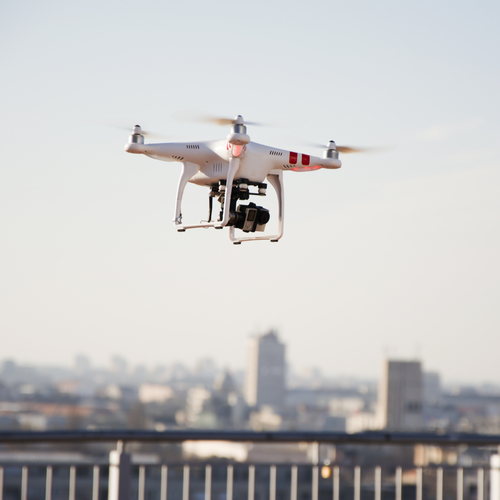 Whether you call them Unmanned Aerial Vehicles (UAVs) or Flying Mini Robots, you may have noticed that drones have been flying high of late. They go where man cannot reach or where manned flight is inefficient and risky, and they’re proving to be very powerful business tools, not to mention invaluable assets to the public sector.

If we look beyond the toy, insect-like devices buzzing around in parks, the drone industry is evolving at an exponential rate. From revealing unknown monuments in the desert near Petra to herding elephants in Tanzania, the sheer breadth of their potential is astonishing.

The public sector is also set to benefit significantly from the use of drones. In a report at the end of 2019, NESTA, the National Endowment for Science, Technology and the Arts, found that using drones, over next 15 years to support delivery of public services in urban areas in the UK could lead to £1.1 billion in cost savings and £6.9 billion increase in GDP.2

However, as the use of drones evolves, so new risks emerge. Criminals are already using drones to sneak drugs and mobile phones into prisons, and researchers have stated terrorists could have the ability to weaponise drones. 3 It’s important to remember too that, just like any other piece of wireless technology, UAVs can be hacked.

We’ve also seen drones cause chaos amongst airports, with both Gatwick and Heathrow’s flights being interrupted by unidentified drones flying near the airports. Perhaps the most well known example of this was the Christmas 2018 drone attack where 82,000 Gatwick airport passengers were disrupted in a drone attack. The runway for the airport was forced to close for 33 hours costing £50 million. 4

Then there’s the question of privacy. After all, who wants a drone whirring over their property at night recording video? Drones can also crash and collide with aircrafts, property and even people. They have the potential to cause significant damage and injury.

Putting a strong emphasis on Health and Safety, then, will be essential. Drone pilots may have to undergo training and ensure that they are aware of the current laws in their area. Restricted airspaces and the maintenance of drones for airworthiness will also be important factors.5

With so many sectors looking to enter the world of drones, insurance policies will have to cover a wide range of risks. These will include cyber-attack, loss of data, theft, public

It’s likely that new risks will be exposed, and that lessons will be learnt. Tiny drones may one day pollinate plants, and big ones might not carry cargo but people in self-flying taxis. If we can manage the risks and keep on top of this high-flying technology, the sky is the limit in terms of drones.