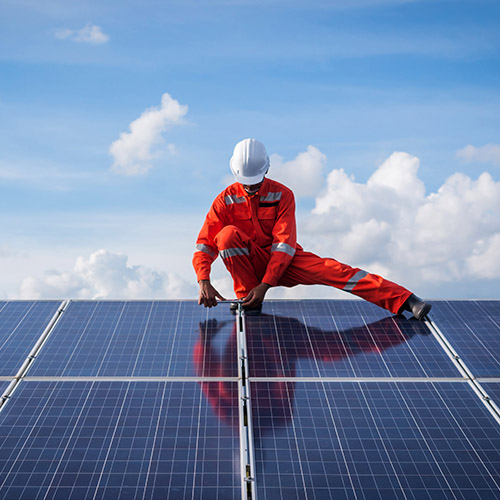 As we emerge from a global pandemic and stare down the implications of a changing climate, it would be easy to feel disheartened. However, new solutions to tackle climate change may yet have a transformative effect on the economy that could create thousands of needed jobs.

In November 2020 the UK Government announced a ten-point plan for a green industrial revolution that aims to create 250,000 jobs. The plan focuses on energy generation, improving the energy efficiency of transport and buildings, carbon capture and investment strategies.

We can all applaud an effort to move to a greener environment, but where is the evidence to suggest these schemes help the economy and generate new jobs? And how can local authorities make the most of these investments?

A key strand of the government’s energy plan, and one not without controversy, is to bring more nuclear schemes on stream. Nuclear projects have, however, delivered significant benefits to their surrounding local economies, in the decades they’re been in existence.

A good example is the Sellafield nuclear plant in Cumbria. As well as employing graduates and apprentices, they’ve invested in multiple education initiatives. In an industry first, they launched The Project Academy for Sellafield in 2016, which provides project management skills for their workforce, supply chain employees and other members of the public. They’re also one of the lead contributors to The National College for Nuclear in West Cumbria and Somerset.

And their work goes beyond just investing in their own industry. They’ve funded a new facility at the Cumbria Academy for Autism, an environmental awareness initiative, even committed 3 years of sponsorship to a healthy eating programme.

Its impact has been widespread and it’s why we’re currently seeing a number of initiatives bringing together public and private investment to follow in Sellafield’s footsteps.

A consortium group led by Rolls Royce plan to build 12 mini-nuclear power plants in the next five years, with the majority of the sites set for the midlands and north of England. They see the sites creating an initial 6,000 regional UK jobs and a further 34,000 jobs over the next 15 years.

A 12-strong partnership, including British Steel, SSE thermal and the University of Sheffield, have just submitted plans to develop a huge carbon capture and hydrogen production scheme in the Humber region. And the numbers are just as encouraging. On top of protecting 55,000 existing jobs, it’s forecast to generate thousands of new jobs and educational opportunities in the surrounding areas.

Earlier in the summer, the Local Government Association (LGA) published a report – Local green jobs: accelerating a sustainable economic recovery – which strongly advocated for investment in low-carbon sector opportunities. By 2030, they estimate 700,000 new jobs could emerge from the industry.

But although encouraged by the projected numbers, the LGA is concerned about bridging the skills gap in time for these regions to take full advantage of the incoming opportunities. They want to see local authorities work with businesses and education institutions to ensure local communities have access to the appropriate training.

Cllr Sir Richard Leese, Chair of the LGA’s City Regions Board had this to say: “Demand for green jobs is due to sky-rocket as we move towards a net zero economy and local government, with its local knowledge and expertise, is best placed to ensure the workforce in every region of the country can successfully surf the new wave of employment opportunities.”

It’s obvious power plants like Sellafield have a profound effect on the communities they serve. From the hundreds of thousands of jobs they create on site and across their supply chain, right down to the social impact initiatives they give a voice to.

More of these projects seem to be waiting in the wings for local authorities to make the most of. Local leaders need to start preparing for what’s to come, otherwise they might well regret it later. Now’s the time to increase knowledge on green investments and put a plan in place to make sure communities are in the best position possible to reap the many benefits green energy can bring.